No Bull on Broad: Training Update

An oft-forgotten obstacle in long distance running are those “evils of elevation”:  hills. Sudden, steep hills or gradually in 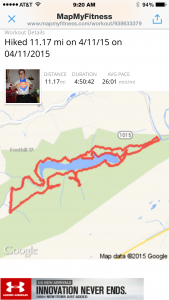 creasing inclines can cause a runner to curse the ground upon which he strides and lead to an early surrender. An important task for those training is to address how they handle inclines before the actual race. Rich put himself to the test last week on an 11+ mile hike. In his own words, “I hiked the entire 11 miles while walking on my toes. My calves swelled up like two cantaloupes, but it was worth it.” Unfortunately, his new physique will not be tested by the flat, even slightly downhill, route of the Broad Street Run. But who would want to face this guy in the Alps, am I right?

I informed Mike of Rich’s accomplishment and he was speechless. His lack of words was not due to astonishment, but rather from the constant throbbing pain shooting through his lower body due to excessive runs of his own, but still…speechless. In place of a quote, he just showed me the stats from one of his runs:  8.51 Miles, 1 hour 16 minutes (9:01 pace). Mike has given his word that no portion of this run was accomplished in the back of an ambulance.

As a reminder, here are the charities being supported by each runner:

For more than 100 years, Big Brothers Big Sisters has operated under the belief that inherent in every child is the ability to succeed and thrive in life. As the nation’s largest donor and volunteer supported mentoring network, Big Brothers Big Sisters makes meaningful, monitored matches between adult volunteers (“Bigs”) and children (“Littles”), ages 6 through 18, in communities across the country. We develop positive relationships that have a direct and lasting effect on the lives of young people.

JDRF is the leading global organization funding type 1 diabetes (T1D) research. JDRF’s goal is to progressively remove the impact of T1D from people’s lives until we achieve a world without T1D. JDRF collaborates with a wide spectrum of partners and is the only organization with the scientific resources, policy influence, and a working plan to better treat, prevent, and eventually cure T1D. As the largest charitable supporter of T1D research, JDRF is currently sponsoring more than $568 million in scientific research in 17 countries.

No Bull on Broad: Training Update

Where Powers of Attorney are Weak